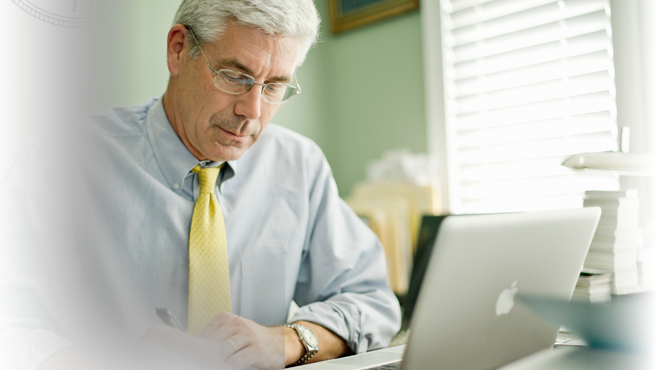 I have always believed that the people deserve better than backslapping politicians who talk a lot but rarely deliver.  My goal as your Senator has been to talk less and deliver more for the conservative values that we treasure in west Georgia.

I am proud to have led efforts to eliminate the car tag tax, protect the income tax exemption for our seniors, reform the tax code to preserve our existing jobs and help create new jobs, and slash government spending and provide accountability through zero based budgeting.   We are coming through this economic downturn and finally getting our economy back on track with steady conservative leadership.  I am also proud to have supported one of the toughest anti-illegal immigration laws in the country and the boldest pro-life legislation in Georgia in decades.

My leadership is about putting our conservative values into action.  With your support, I will continue to provide this kind of effective leadership.

I am honored to represent you in the State Senate.  Please contact me if I can ever answer a question for you about pending legislation or Georgia’s laws.

SENATOR BILL HEATH’S POSITIONS ON ISSUES IMPORTANT TO YOU

As a Georgia State Senator, I believe that we must not raise taxes.   The State, Federal and Local governments must live within their means, just as we have to do in our own homes.
We must also recognize that in a growing economy, revenues increase without any increase in tax rates.   We need a disciplined method of reserving an appropriate amount of revenue during good times and returning the excess to the taxpayers in proportion to the amount paid.

Just as personal savings are prudent, there should be an appropriate level of revenue shortfall reserve for the state.   A revenue shortfall fund allows the state to continue to provide the vital functions during difficult times when its citizens can least afford cuts to services or increased taxes.

Spending is the greatest problem we have in government today.   When the economy grows, so does any government’s ability to spend.   Good economic times almost always result in increased spending.   We must be disciplined when tempted to fund new programs or increase funding to existing programs.   We must keep in mind programs created during a good economy will continue into a declining economy and recognize the financial burden of sustaining them.

We must always ask ourselves whether any new proposal is a basic function of state government and could the service be better provided by another source.   Government should not compete with private industry.

The HOPE Scholarship program has been one of the most successful programs in our state’s history. It has provided access to a college or technical school for countless students.  However, the popularity and success of HOPE has also led to serious funding challenges over the last several years.  To help preserve HOPE, several reform packages, including one proposed by Governor Deal this past Session, have been passed by the General Assembly.  I have proudly supported each of these legislative remedies and have proposed my own package as well.  Preserving HOPE and what it offers our students has been and remains one of my top priorities in the Senate.

The Declaration of Independence states “We hold these truths to be self-evident, that all men are created equal, that they are endowed by their Creator with certain unalienable Rights, that among these are Life, Liberty and the pursuit of Happiness”. It is no accident that Life is listed first.   For without life, there is no liberty and without liberty there is no pursuit of Happiness.

To define the beginning of life at any point other than the union of a viable egg and sperm would be arbitrary.   To define the end of life at any point other than natural death would likewise be arbitrary and in opposition to the Declaration of Independence.   It is our responsibility to defend life from beginning to end.   I have consistently earned the endorsement of Georgia Right to Life.

The 2nd Amendment of the United States Constitution states “…the right of the people to keep and bear Arms, shall not be infringed”.   I’m pretty much a purist.   When the Constitution says this right should not be infringed, I believe that is what it means.   Arms, in and of themselves, are not dangers to anyone or anything except perhaps to a government seeking to dominate over its people or someone who would seek to harm you or your family.   As such, I believe that the greatest threat to our personal safety is for the crooks and thugs to believe us to be un-armed.   I have consistently received the highest level of endorsement from the NRA and Georgia Carry.

We often hear people talking about “States Rights”.   It is the 10th Amendment that they are referring to.   However, the 10th Amendment doesn’t mention “States Rights”.   What the 10th Amendment says is “The powers not delegated to the United States by the Constitution, nor prohibited by it to the States, are reserved to the States respectively, or to the people”.   Today more than ever we, the people, must be ever mindful of the Federal government’s disregard of the Constitution.   As a Georgia Senator, I will always strive to defend your rights from intrusion by government.

I am thankful that my mother and father made sure that I attended church as a child.   On Tuesday, May 18, 1971, during revival at the First Baptist Church of Bremen, Georgia, I accepted Christ as my personal savior.   I have had my spiritual highs and lows but God has never forsaken me.   When my wife and I contemplated having children, we realized that we needed to rekindle our relationship with Christ.   Today we worship as a family at the First Baptist Church of Bremen.   Of all the documents that guide our lives, I believe the Bible to be the most important.

While I believe there are many well intended proposals introduced each year, the fact is that we can’t legislate personal responsibility and morals.   As a nation and state, we have adopted laws against all sorts of irresponsible and immoral activities in an effort to create what we individually believe is the perfect environment for us to live in.   However, we observe that over time the tendency is for people to become dependent upon the government for all our safety and well-being.   Recall that the Declaration of Independence refers to Liberty as the second “unalienable Right”.   Liberty is defined as “the positive enjoyment of various social, political or economic rights and privileges”.   Liberty is worth defending.   We need to increase personal responsibility and cultivate positive moral values.

Illegal immigration is just that – ILLEGAL.   As such we should do all that we can do to make Georgia unattractive to illegal immigrants.   No tax dollars should be expended on illegals whether it is local, state or federal dollars.   Illegals should not be allowed in our colleges and universities.   Every effort should be made to deport any and all illegals.   We shall continue to urge the federal government to seal our borders and enforce our immigration laws.

Have a question for Senator Heath on an issue important to you that is not answered here?  Please go to the Contact Page to email Senator Heath your question.  He will respond to you as soon as he is able.

I was proud to have voted for legislation this past legislative session that requires those receiving welfare benefits to undergo drug testing.  I believe we should continue to shrink the size of government and reduce welfare programs.  Every government program like welfare should be strictly temporary and those on welfare should be pushed to get back to work as soon as possible.